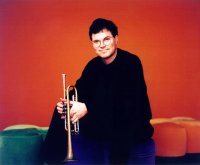 Wiff Rudd, a native of San Antonio, Texas, is currently Professor of Trumpet at Baylor University.  He received music degrees from Baylor University (BME) and the University of Northern Colorado (MM).  While serving as Assistant Professor of Music at Oklahoma Baptist University for seven years, Mr. Rudd was also affiliated with the Oklahoma Symphony and Lyric Theater Orchestra. He toured for eight years with the Dallas Brass and is a founding member of Rhythm & Brass.

Mr. Rudd is an active soloist, orchestral and chamber musician, clinician and adjudicator. Recent performanes include appearing as a soloist at Chicago’s “Mid-West International Band and Orchestra Clinic” and the New York premiere in Carnegie Hall of Joseph Turrin¹s “Chronicles” for solo trumpet and wind ensemble.

He was principal trumpet of the North Arkansas Symphony Orchestra, a member of the Boston Mountain Chamber Players, and has adjudicated for the State Solo & Ensemble Contests of Texas and Oklahoma, the Louisiana Trumpet Competition and the International Trumpet Guild¹s Solo Competition Finals.