Author Note from Chris Roberts: I wrote this article shortly after my senior recital that was November 15, 1993.  Some of these thoughts were echoed in How to Make First Chair…10 years later.

I.  Inspiration/Will to Practice
The will to practice, if great enough, can overcome deficiencies in any other factor in the preparation of a recital or performance.

II.  Fundamentals
Good command of the fundamentals gives mastery and confidence to the performer.  Confidence is one of the elements of good mental health needed for an outstanding performance.

III.  Performance Experience
Anything familiar is more comfortable than the unfamiliar.  Since reproducing the ‘pressure’ of performing in the precise performance environment is impossible, it is necessary to take advantage of every performance opportunity that presents itself.

IV.  Recording/Listening
Critical listening is absolutely essential.  To listen objectively and critically on a regular basis can serve three purposes: to help determine which areas need refining, to indicate improvement, and to encourage further practice.

V.  Listening to Masters
It is necessary to have the proper concept of an excellent performance.  Spoken language is limited in its descriptive capabilities.  Hearing a performance of the highest quality can often describe the desired result better than words alone.

No matter how difficult a passage may be, it is distracting if it sounds difficult.  Many of the most memorable performances are by individuals or groups that perform with apparent ease the literature or passages that are known to be difficult.

VI.  Mental/Physical Health
Mental health in the form of confidence can be fostered through successful practices and performances.  The mental skills described in The Inner Game of Music by Barry Green can be a tremendous help to anyone in any performance field.

Whether the performance in question is for an audience or for a scholastic exam, the absence of physical stress increases the quality of the performance.  Rest is very important in the preparation and execution of a quality performance.

Remember that the familiar is better than the unfamiliar.

Practice and fundamentals help every new musical passage become familiar territory immediately.
Performance experience helps the performance environment and conditions become familiar.
Through recording and critical listening, familiarity is given at least to the awareness of strong and weak areas.
Witnessing an outstanding performance, either live or recorded, can bring the concept of an outstanding performance to a point of familiarity.

These are some specific things that were used in preparation for my own performance on November 15, 1993.  My senior trumpet recital consisted of the following: Concerto in Re by G.Tartini, Prayer of St.Gregory by A.Hovhaness, Feu d’Artifice by P.Gabaye, Concerto by Arutunian, and Carnival of Venice by J.B.Arban.

I set high expectations for myself.  High expectations encourage me to practice to be the best player I can be.  High standards may be the most important facet of the entire preparation process.

One of the reasons I wanted to have a fine performance is that I received the Mae Whipple scholarship.  I knew the fine company of music majors that I became a part of upon the presentation of that scholarship.  My philosophy was that if I had a good recital, the scholarship would be as much an honor for future recipients as it was for me.  I was very proud to be in the company of someone I had looked up to as a freshman in 1986 — my section leader Doug Lockard, a former scholarship recipient.  I fell in love with the Tartini the first time I heard Doug play it in the spring of 1987.  I had grown up hearing Mr. Kramer play Carnival of Venice and always dreamed of performing it.  When I was working on my math degree, Mr. Kramer asked me when I was going to do what I really wanted to do. I felt that with the sentimental selections of the Tartini and Arban, both signa­ture pieces of Mr. Kramer, I was finally doing what I always wanted to do.  Mr. Kramer also helped me correct a distorted embouchure, and for that I will be forever grateful.

I was also motivated to practice because I had invited literally hundreds of people to my recital and wanted to put on a “good show” to many people that don’t frequent the fine arts building.  One person that accepted the invitation was my high school band director Neal Sutton.  Neal lived over five hours away and was going to fly in for the performance, so I certainly didn’t want to ruin the trip for him by not preparing.

Finally, I was encouraged to practice because I had an excellent performance model in Dr. James Buckner.  Dr. Buckner was my trumpet instructor that had two wonderfully critical ears and two-hundred analogies for each of my dozens of trumpeting shortcomings.  The motivation to practice became greater every day, because the prescriptions Dr. Buckner gave me produced immediate results.  Improvement and success are wonderful motivators.

Dr. Buckner said many times, “It’s just like lifting weights.” If you consider the job that the muscles in your face have to do, that statement is perfect.  The Arban flexibility exercises (p. 42-43) are like push-ups or bench presses—absolutely essential to every “work-out.”  The Arban interval studies (p. 125-131), tonguing studies (p. 155-190), and slurs (p. 39-41) are fundamentals that cover almost any situation you can encounter.  Doesn’t it make sense that any passage is made up of small or large intervals, either tongued or slurred?

Dr. Buckner also showed me how to slow down fast passages and how to properly use the metronome for overlearning.  The rehearsal of passages that are to be tongued quickly may be one of the most significant learning experiences in my private lesson history.  When you practice the quickly tongued passages slowly, the notes are long and connected.  The notes will ultimately be perceived as short due to the tempo.  I can now look at fast sixteenth note passages and think about playing them as long as possible, but tongued very clearly.  This concept helps to reinforce the constant flow of air that is required for clarity of the fast passage.  This may seem like perfect logic, but it was a concept that I didn’t fully understand until Dr. Buckner conveyed it to me through his descriptions and excellent playing demonstrations.  Dr. Buckner mentioned in my lessons that a teacher of his [Clifford Lillya and Vincent Cichowicz] had told him to ignore the ‘dots’ over a series of sixteenths.  This is the same concept of fast tonguing just described.  Dots or staccato indicators sometimes cause players to use the ‘tut’ syllable rather than the ‘tah’ syllable.  When ‘tut’ is used, not only does the line not sound characteristic, the tongue is having to work twice as hard and the passage will sound difficult and frustrating.  (Of course, the ‘tut’ syllable in cer­tain musical contexts may be exactly what is desired.)

I was lucky enough to have performed in many situations such as big bands, jazz combos, marching bands, concert bands, orchestras, weddings, church services, and variety shows.  These experiences over the years contribute to the quality of every performance.  I had taken a sabbatical of sorts from the performing ensembles I was involved in during the semester of my recital.  There was a particular “hunger” to perform by the time November 15 came around.

The process of recording and listening to yourself or the ensemble you are associated with is so valuable that it must be included as one of the factors in preparing for a performance.  My recital was on a Monday night, so I decided to record myself each Monday night for each of the four weeks prior to the performance.  I was able to objectively hear and listen to many of the things that Dr. Buckner was describing to me.  Hearing yourself will reinforce greatly what a private instructor or adjudicator may describe.

There are many fine recordings of the pieces I performed at the recital.  Some of these recordings actually helped in the selection process.  The recording of Maurice Andre playing the Arutunian Concerto helped me understand the work, and I have embraced that piece ever since.

I think that hearing and meeting Doc Severinson also encouraged me to have a fine recital.  I believe that Doc is a fantastic performer and seeing him greatly contributed to my concept of stage presence.  I admit that another individual with extraordinary performing skills is Michael Jackson.  Michael will always have his critics, but someone would have to be blind not to realize that he can take control of any stage.  I watched Michael in a three-hour concert the morning of my recital in hopes that as a performer, I might absorb some degree of confidence and control.

After only a couple of chapters of The Inner Game of Music, I noticed a difference in my concentration and playing.  I was able to grasp the concepts offered in the book, and Dr. Buckner would often employ ‘Inner Game’ techniques in my lessons without me realizing it.

I was especially dedicated the four weeks prior to the performance.  I made myself go to bed at 10PM every night for that month.  When you consider that I lived in a fraternity house that semester, you begin to realize that I believe strongly in being fully rested will contribute greatly to a performance.

I want to add that by no means was my recital flawless.  I had several ‘flukes’ that cropped up that I had never missed before, and I believe you have to expect flukes and let them roll off you when they occur.  I listen to the tape of my performance and wish I could do it again to try to correct the things I missed.  There are things that I can perform with much greater ease than I could then, and I will always be in search of that perfect performance that few ever achieve.

I would like to thank the teachers that have contributed to my musical experience including James Coffman, Neal Sutton, Mr. Evanson, Mr. Kramer, Mr. Rollins, Mr. Dimond, Dr. Branstine, Dr. McAfee, Dr. Hesse, Dr. Etienne, Mr. Chase, Dr. Sommer, and the Ryes.  The faculty at Henderson is without question the best anywhere.

Thanks especially to Dr. James Buckner for pointing me to good equipment to play on and giving me a good shove down that very long road of constant self-improvement that musicians travel.

Hopefully it can be seen from my personal experiences that the preparation of a recital or performance can be represented by the diagram showing a number of contributing factors.  It is my hope that others can simply relate to the figure, its descriptions, or my personal applications of it.  I realize that some readers may find no new revelation from this article, but in that instance I hope it can serve as additional reinforcement of good concepts so that someone may be further convinced or inspired to perform a outstanding recital. 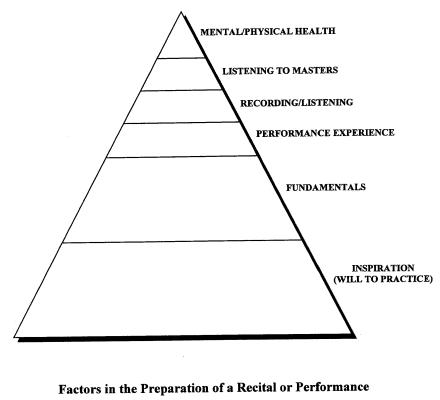