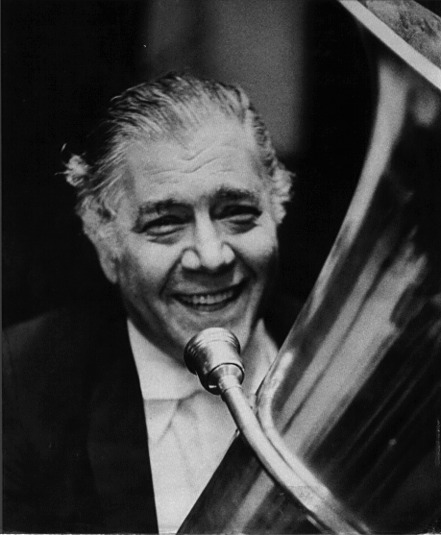 Arnold Jacobs was the principal tuba player of the Chicago Symphony Orchestra and a legendary brass teacher known around the world.  Chicago Symphony President Henry Fogel wrote,  “One can hardly overstate the importance of Arnold Jacobs as a musician and as a teacher.  His musical abilities were rightly the stuff of legend, and served for over four decades as the foundation of the brass section of the Chicago Symphony Orchestra. As a teacher, he had an impact on generations of brass players that is almost certainly unequalled by anyone else.”

Mr. Jacobs’ tenure with the Chicago Symphony spanned from 1944 to 1988. He was a founding member of the Chicago Symphony Brass Quintet, taught tuba at the Northwestern University School of Music; many of his former students are principal players in orchestras around the world.  Mr. Jacobs presented lectures and clinics for orchestral musicians worldwide.

Mr. Jacobs was well-known for his ability to motivate and inspire brass instrumentalists by teaching them new respiratory techniques.  Many of the
leading brass and woodwind players of his day considered him the greatest tubist in the world, said Brian Frederiksen, a freelance tubist and author who published the 1996 book Arnold Jacobs: Song and Wind.  From his studio at the Fine Arts Building, Jacobs taught many of the Chicago Symphony’s wind players, helping them solve a variety of performance problems with an array of tools — from oscillators and barometers to machines used to generate and analyze musical pitch.  “He basically started by studying physiology as a hobby, and he just kept reading the medical books,” Frederiksen said.  “He was totally self-taught on this.  He got to the point that many doctors said he knew more about the physiology of breathing than many doctors did.  The thing that amazed me is I’ve heard him work with hundreds of students and they all sounded better after just 15 minutes with him.”

Mr. Jacobs said that he helped players complaining of reduced lung capacity, stage fright and a variety of other problems by first showing them how to forget their emotional concerns and concentrate on “the product” — their sound.  “I don’t teach them as tuba players, but as human beings,” he said. “Whichever instrument they play, they still have to develop as storytellers of music.  I insist that the ability to communicate musical messages be dominant.”

Born in Philadelphia, Mr. Jacobs grew up in small towns in California. He took a few lessons from his mother, a vaudeville pianist, and learned music by listening to records by the Herbert Clarke band. His first instruments were the trumpet, bugle and an old trombone that he picked up for $10 in a thrift shop.  Jacobs earned a tuba scholarship at age 15 to Philadelphia’s Curtis Institute of Music.  After graduating in 1936, he played two seasons at the Indianapolis Symphony.  From 1939 to 1944, he was a tubist in the Pittsburgh Symphony under Fritz Reiner.  In 1941 Mr. Jacobs toured the country with Leopold Stokowski and the All-American Youth Orchestra.  Mr. Jacobs came to the Chicago Symphony under Desire Defauw in 1944.   During the spring of 1949 he took temporary leave from the Orchestra to tour England and Scotland with the Philadelphia Orchestra.  In June, 1962, he had the honor of being the first tuba player invited to play at the Casals Festival in Puerto Rico.  The Second International Brass Congress presented its highest award to Mr. Jacobs in 1984, and in Chicago, Mr. Jacobs was awarded honorary Doctor of Music degrees from VanderCook College in 1986 and DePaul University in 1995.

Mr. Jacobs retired from the Chicago Symphony in 1988 due to vision problems — he could no longer see the music.  In 1991 he worked with the United States Marine Band.  In his introduction to the Band, conductor Colonel John Bourgeois said, “It is rare to have the master performer as the master teacher. Arnold Jacobs is both.”

Adolph Herseth, retired principal trumpeter of the Chicago Symphony stated, “I cannot think of anyone in our exotic world of music, and particularly, of course in the world of brass players, who has made such a contribution to so many facets of our art.”  Former Chicago Symphony trombonist Edward Kleinhammer said, “As a teacher he is world-acclaimed, and as a colleague and musician.  I am thankful to God for Arnold Jacobs.”

According to the Canadian Brass’s Charles Daellenbach, “This man was a great natural teacher who could have probably taught anything, but who just happened to be a wind specialist.  He’s the kind of legendary teacher that Liszt was for pianists of the 19th century.”  Dale Clevenger, principal horn of the Chicago Symphony, states, “Nearly every brass player in America has studied with Arnold Jacobs, whether they know it or not.”  Another colleague, former Chicago Symphony principal oboist Ray Still said, “He [was], simply, God’s gift to wind musicians everywhere…”

The late Chicago Symphony conductor Georg Solti once said of Mr. Jacobs, “Through his unstinting support and encouragement of generations of brass players the world over, he has justifiably become a legend in his own time.”

Renowned performer and pedagogue Arnold Jacobs passed away unexpectedly on Wednesday, October 7, 1998, at the age of 83.

Personal Observations:  Dr. Jacobs managed to accomplish more in less time than any teacher I have known.  He had a gift for teaching and the ability to immediately adapt to the level and needs of each student.   I observed him in two weeks of master classes at Northwestern University, played for him in one master class, and took five lessons with him.  Years later I find improvements in my playing still occurring as a result of those lessons.