Vincent Cichowicz, retired Professor of Trumpet at Northwestern University, began his career at age 17 in the Houston Symphony Orchestra.  After a brief period of service in the United States Fifth Army Band, he resumed his performance career in Chicago while attending Roosevelt University.  In 1952, he became a member of the Chicago Symphony Orchestra, where he remained for 23 years.  He was also a member of the legendary Chicago Symphony Brass Quintet and was a participant in the celebrated Grammy Award-winning Columbia recording of Gabrieli’s Antiphonal Brass Music, recently reissued on CD by Sony Classical CD [MHK 62353].  He was a student of Renold Schilke and Arnold Jacobs.

He has performed under the baton of the world’s leading conductors and composers, including Rafael Kubelik, Fritz Reiner, George Solti, Jean Martinon, Otto Klemperer, Leopold Stokowski, Paul Hindemith, Daniel Barenboim, Leonard Bernstein, Carlo Maria Guilini, Claudio Abbado, Igor Stravinsky, and many others.  In 1995 he was appointed Music Director for Chicago’s Millar Brass Ensemble and participated in their most recent recording, Brass Surround on Delos [DE 3171].

Cichowicz joined the faculty Northwestern University in 1959, and became Professor of Trumpet in 1974.  He retired in 1998. 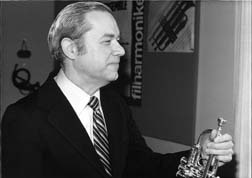 Cichowicz is an honorary member of Phi Mu Alpha and Pi Kappa Lambda, and in 1997, he received a special achievement award from the European Chapter of the International Trumpet Guild.  He was also presented “The Legends in Teaching Award” from Northwestern University.  Mr. Cichowicz has been a faculty member of the National Youth Orchestra of Canada since 1980, and the Brass Seminar program at The Domaine Forget in Charlevoix, Quebec since 1986.

He has conducted numerous workshops throughout the United States, Canada, Europe and Japan and is regarded as one of North America’s foremost experts in brass pedagogy.  Cichowicz has written numerous articles and arrangements, was a member of the steering committee responsible for the founding of the International Trumpet Guild, and a former member of the advisory board of The Instrumentalist magazine.

Personal Observations:  Studying with Vincent Cichowicz was one of the major goals of my trumpet playing.  He literally had students from all over the United States, plus Canada, Germany, and Japan.  He taught me how to think and solve my own playing problems as well has how to do the same for my students.  I had about fifteen lessons with Mr. Cichowicz.