Robert Levy is Professor of Music and Conductor of the  Lawrence Wind Ensemble and Symphonic Band at the Lawrence Conservatory in Appleton, Wisconsin.  He is one of this country’s more diverse musicians. He has thirty recordings on more than ten labels to his credit as soloist, chamber musician, with jazz groups, and as conductor. A frequent guest soloist and clinician, he has performed and conducted throughout the United States, Canada, Australia, China, Portugal, Haiti, and Jamaica. He has served as guest artist and on the faculty for many summer music festivals and camps, including Interlochen, Empire Brass Symposium at Tanglewood, Red Lodge (Montana), Tidewater Music Festival (Maryland), Blue Lake Fine Arts Camp (Michigan), Encore/Coda (Maine), and numerous others. In 1991 he was guest artist-in-residence at the Western Academy of Performing Arts in Australia, performing a solo recital and presenting trumpet master classes. In 2001 he performed and presented master classes at three music conservatories in Beijing and Xian in China. 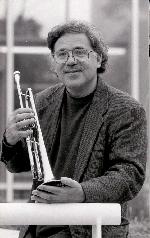 Mr. Levy has recorded and toured both as soloist and with marimbist Gordon Stout as the Wilder Duo, with the Iowa and Tidewater Brass Quintets, with the Boston Jazz Composers Alliance, and the Ken Schaphorst Big Band. He has recorded and performed with many of today’s finest brass artists, including David Jolley, Martin Hackleman, and Bill Scharnberg, horn; Chris Gekker, trumpet; Michael Powell, trombone; David Taylor and Thomas Everett, bass trombone; Sam Pilafian and Harvey Phillips, tuba; and Brian Bowman and Loren Marsteller, euphonium. His most recent CD’s, “Cross Over” on the Stellar Sound Productions label and “Blackberry Winter” (Mark Records), received high praise from Cadence magazine. Other recordings have been released on the Serenus, Trilogy, CRI, Accurate, Klavier, Golden Crest, and Northeastern
labels. He has also performed with the National Symphony Orchestra, and as soloist at Carnegie Recital Hall, the Museum of Modern Art, and the New York Brass Conference, and has twice been a featured guest soloist for the International Trumpet Guild’s Annual Conference. He has also served on the Board of Directors and Composition and Commissioning committees for the International Trumpet Guild.

A leading proponent for contemporary music over the past thirty years, Levy has premiered more than one hundred thirty works as soloist, chamber musician, or conductor. Mr. Levy continues to “champion” the music of American Composer Alec Wilder, with whom he enjoyed a close association for many years. Since 1987 the “Robert Levy Brass Series” with Nichols Music Company (now Ensemble Music) has grown to include more than 40 works including compositions by Levy. As a composer, his works have been premiered and performed by some of the leading brass artists in the country: Chris Gekker, Sam Pilafian, and David Taylor among them. In 1997 Levy was awarded a fellowship to attend the Virginia Center for the Creative Arts, which followed a “New Work” commissioning grant award from the Wisconsin Arts Board.

Locally he performs with the Lawrence Brass, Extempo, and Flex, and is co-leader of the 17 member Big Band Reunion, which recently produced its first CD following performances with Carl Fontana, Ed Shaughuessy, Clark Terry, Bill Watrous, Marlena Shaw, and Eddie Daniels. He holds membership in the International Trumpet Guild, and Wisconsin Alliance for Composers. Robert Levy holds degrees from the Ithaca College School of Music and University of North Texas.

Robert Levy was Henderson’s first full-time professor of trumpet, and it was also the first position he held.

On January 14, 1986, Levy returned to Henderson for a guest recital with Gordon Stout, marimba: