Born in 1927, Doris Schmarzo, studied voice with Marie Spencer of St. Ansgar, Iowa, and opera with Bartold Busch of Minneapolis, Minnesota, where she received her formal music education.  She then traveled as a trumpet soloist with the Parkinson Music Ensemble for two years, performing Herbert L. Clarke’s Bride of the Waves over 900 times in one year.   Doris moved to Charles City, Iowa, in 1958 and became choir director of the First Congregational Church Choir for the next 37 years.  Doris was organist for 25 of those years and also directed theYouth Handbell Choir.

She was a voice coach and piano accompanist to countless students for 50 years (including state and local music contests), played organ at Ray’s Pizza Sing-Alongs, participated in numerous community plays, including ‘Good-Bye Charlie Brown’, ‘A Funny Thing Happened on the Way to the Forum’, ‘The Fantastics’, ‘Send in the Clowns’ and ‘The Last of the Red Hot Lovers.’ She was manager of the Boyer Music Store in Charles City for several years.

Doris passed away in 1996.  A memorial has been established in her honor which annually gives a music scholarship to the Charles City High School senior who best exemplifies the spirit, love and musical leadership shown by Doris over her many years of involvement in music.

Personal Notes: Although I never formally studied with Doris, she had an enormous impact on my development.  At her insistance I played in trumpet trios with her at church and for community groups.  Sometimes she played piano or organ and another trumpeter joined us.  Doris was my accompanist in 9th grade when I played Balay’s Petite piece concertante.  One of my favorite memories is from a few years before she died when I took her to Mason City, Iowa  to a recital by Alan Dean, a superb trumpeter originally from that town. 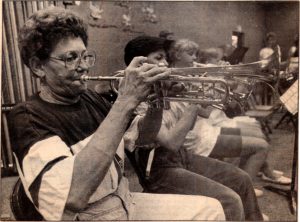