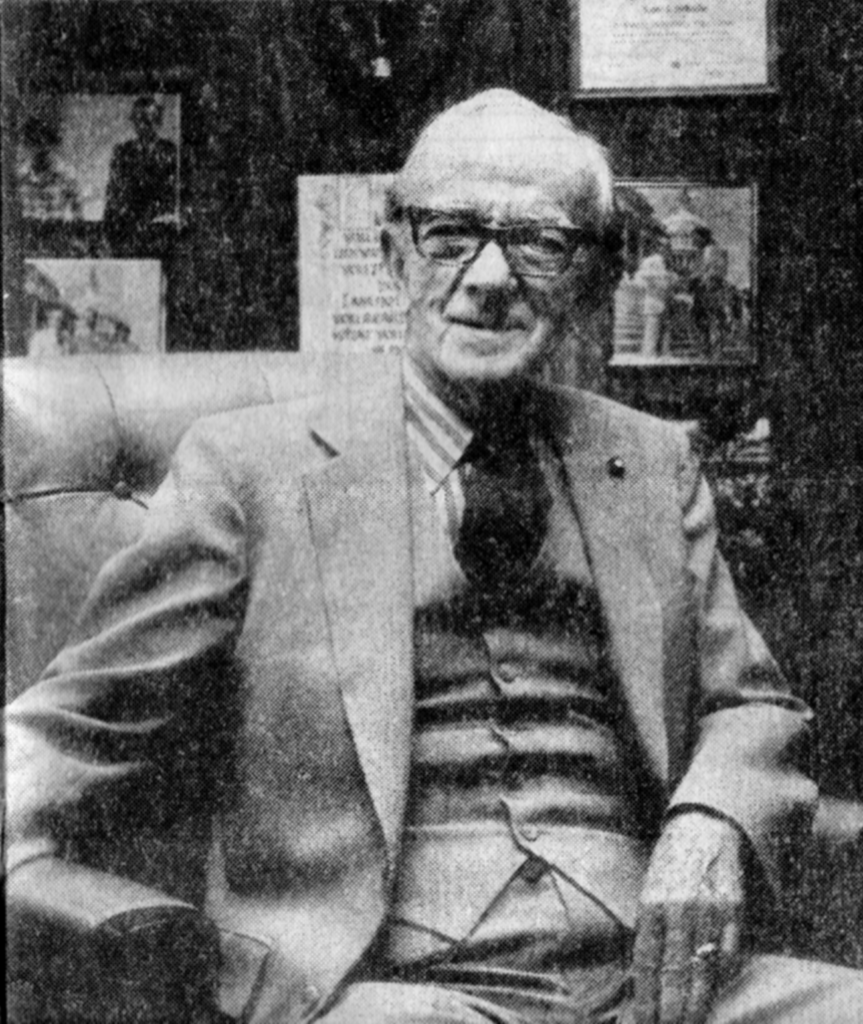 Leo Schula was my first band director.  He was a graduate of Northwestern University (where I received my doctorate 29 years later) and was a pianist.  Following his retirement from teaching he became mayor of Charles City for at least 7 terms.  One of his major campaign issues was reinstating the municipal band that had been shut down due to a disastrous tornado.  I particularly remember the great confidence he had in me, often more than I had in myself.  In addition to directing our band (one rehearsal a week after school) and teaching group lessons, Mr. Schula was also responsible for my first trumpet trio and solo performances.  He was my teacher for 4th, 5th, and 6th grades, and I took private lessons with him during the summer.

At this point I should thank an anonymous junior high trumpet player who, along with clarinet, saxophone, and trombone students, were brought to my school during 3rd grade.  This young man was the finest trumpet player I had ever heard…because he was the first one I ever heard live!  I knew then that trumpet was my instrument, although I had no idea that I would play for more than a few years.  Just before I enrolled in elementary band program my uncle in the Air Force was transferred to Germany.  Uncle Gary Scholten had been a fine high school trumpeter — he played Frank Simon’s Willow Echoes as a high school student.  He loaned me his Conn VocaBell long-bell cornet (a cornet shaped the same as a trumpet).  Good valve oil was unavailable during his youth, so he spit on the valves.  To this day, his instrument has never been oiled.  My mother gave me my first lessons on this instrument — she still remembered a little bit from when her brother was in high school.  I recall that she taught me a C scale with a B-flat.  We knew it didn’t sound quite right, but we didn’t know why!

Eugene Martin taught orchestra, even though he was a clarinetist.  I was selected to play first trumpet in the elementary orchestra in 5th grade.  In band we had at least 15 on a part, and in the orchestra I was the only one.  I was scared to death!  Mr. Martin kept telling me to play louder, and I didn’t do it.  Finally he moved me to second trumpet.  I was quite relieved, but also quite disappointed.  I learned my lesson and have never hesitated to play loudly since.  Mr. Martin was also my 7th grade band director and had me play my first solo with band, Handel’s Where E’er She Walks.  In high school I played first trumpet in his orchestra during my junior and senior years and got my first chance to play Handel’s Messiah.

Roger Whitcomb (must login to read) taught group lessons to students at the junior high school.  He was very helpful, and I particularly remember him helping me with Herbert L. Clarke’s Stars in a Velvety Sky.  I studied with him during 7th, 8th, and 9th grade.

Dennis Thornton was a music major at the University of Iowa.  The summer after my sophomore year of high school I took lessons at his house, which was only a few blocks away.  Dennis introduced me to the Hebert L. Clarke Technical Studies, which convinced me that my third valve finger had a mind of its own.  Dennis must have been in Bob Gower’s high school band, but I do not know that for certain.

Bob Gower was my band director from 8th grade through my senior year.  His father, William Gower, was author (along with Himie Voxman) of the Rubank Advanced Studies — we began studying from this method in 6th grade, and it was a great help to my development.  Mr. Gower was a great musician, and I count myself very lucky to have had him as one of my directors.  We always played music for him, never notes and rhythms.

Mr. Gower featured Paul Smoker on trumpet with the high school band while I was still a junior high student.  To this day I remember Smoker playing Levinsky’s The Painted Desert…I was hooked on trumpet from that point on.  It was primarily through Mr. Gower’s efforts that Bud Brisbois and Clark Terry came to my high school, inspirations which were to seal my career in music.  [Note:  I just found the program, dated April 20, 1967.  Smoker also played The Virgen de la Macarena and Anderson’s Bugler’s Holiday with Greg Madsen and Tim Yeager.  More on Greg and Tim below.]

I took private lessons from Mr. Gower.  He was particularly helpful to me in correcting my embouchure after I unconsciously changed it during all the work preparing for Bud Brisbois.  Mr. Gower had stopped playing trumpet for a number of years and began playing cornet to figure out how to help me.  I particularly remember him walking around the band room playing Clarke’s Technical Study No. 2.  It was some of the most beautiful playing I had heard.

This is a brief bio:

John Robert “Bob” Gower was born on May 8, 1932, in Centerville, Iowa, the son of William and Mabel (Turner) Gower.  He moved with his family to Iowa City when he was a small child, grad­uated from City High School in Iowa City, and was in the United States Air Force 505th Air Force Band from 1951 to 1953.  Following this, he returned to Iowa City, remaining with the United States Air Force Reserves from 1953 to 1958.  During that time, he attended the University of Iowa, graduating in 1957 with a Bachelor of Music degree.  He began his teaching. career as the Director of Bands for Williamsburg High School in Williamsburg, Iowa.

In 1961, Mr. Gower became the Director of Bands for the Charles City High School and director of the Charles City Municipal Band.  He also served as a guest conductor, adjudicator, and clinician for numerous contests and honor bands in Iowa.  While teaching, he pursued graduate study at the University of Iowa and the University of Northern Iowa.  He retired from teaching in 1979.

In 1957, he was inducted into the University of Iowa’s “Finkbine Men” for outstanding student leadership in the Instrumental Music Department. He was named Distinguished Bandmaster of America by First Chair of America in September, 1976.  He received the Slingerland Drum Company award for the most outstanding school music program in the United States In 1977.  Mr. Gower was named in the first edition of the Marquis Who’s Who in School District Officials, and on May 10, 1978, the mayor of Charles City declared the day “Robert Gower Day” in recognition of the many accomplishments of the Charles City Jazz Band.

When he had spare time, he was a sports enthusiast, enjoying the Iowa Hawkeyes, the Green Bay Packers and the St. Louis Cardinals.  He also loved trout fishing and enjoyed coin collecting.  Mr. Gower passed away on February 28, 1997.

High School Trumpeters:  There were several high school trumpeters that were guiding forces in my early career, all products of these great teachers.  Greg Madsen played great trumpet (on his cornet!) and I remember his performance of Clarke’s Trumpet Voluntary with the high school orchestra.  On another concert, Terrie Bishop performed Singer’s Deep Blues with the high school band.  Tim Yeager followed Greg as first chair.  Tim was on the basketball team, so I ended up as first trumpet in the pep band.  He received the award for the highest accuracy in shooting during a basketball game — 100%.  He shot one time and he made it!  Tracy Gerlach played very well, as did Tom Dostart.  All of us were fortunate to have grown up in a state rich in its band tradition and with excellent teachers and supportive parents.